While launching the $GURU token, it is important for us at DexGuru to maintain the community values that brought us to web3. This begins by ensuring that we, as a DAO, are building in public and not in private. The $GURU token is the first major project of GuruDAO and should be a function of our values and act as the glue that ties the community together. Without consensus around token structure and distribution, DexGuru can’t reach its full potential. Keeping this in mind, this document outlines the first steps towards the $GURU token.

The $GURU token will be built using the ERC20 token standard on Ethereum. As the core token of the DexGuru platform, it will initially act as a governance token. Meaning, that $GURU token holders are granted voting rights in the maintenance and evolution of the project. As discussed in GuruDAO documentation, DexGuru will evolve with time and so will the $GURU token. Later on, the $GURU token could double as a utility token, subscription pass and more. Sky is the limit and it is GuruDAO deccsions that controls token supply and demand. As for token structure, the maximum supply of $GURU is capped at 100,000,000 and can not be changed under any circumstances.

In DAO Bootstrap Phase, we will have to decide how to distribute 60% of community-owned tokens. We can expect 1-5% of tokens allocated for early community participants’ rewards, 20-30% allocated for LBP, and the rest set for vesting into GuruDAO treasure. It is up to DAO to decide exact allocations prior TGE.

DAO can not change existing investors, team allocations, and vesting schedules. 40% of GURU tokens allocated with two years vesting with six months cliff following TGE. None of the team or investors will have liquid tokens at the token launch day.

It is important to note that at any given moment the GuruDAO will control more voting power than the team and VCs combined. This is essential to the maintenance of GuruDAO as voting power is distributed to lean towards the community. In the unfortunate event that there is a disagreement between $GURU holders, the community DAO will have the largest say in the final outcome of the dispute. 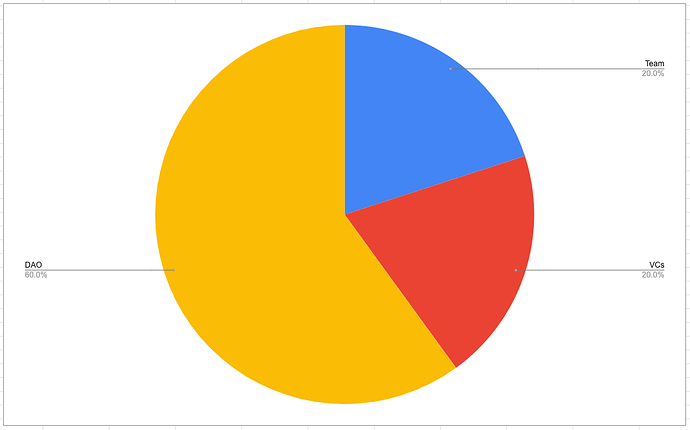 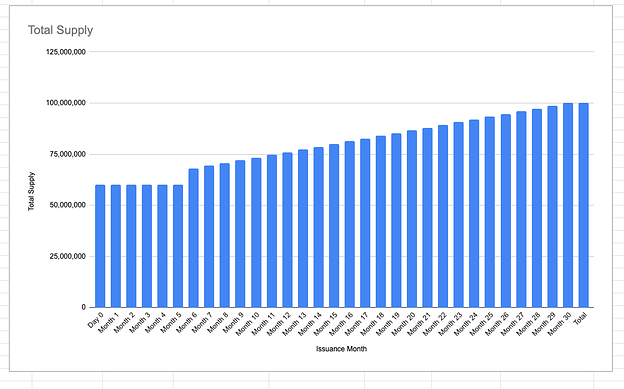 ve-Tokenomic model allows us to create a long-term alignment between token holders, community, DAO, and the product. The core component of any good tokenomic is a balance between token supply(sell pressure) and token demand (buy pressure). DAO governed with vote escrowed token and controlling own liquidity can achieve perfect balance between supply and demand.

Subscription-based monetization for DexGuru product always was a part of the plan. This is how it will work with DAO and ve-tokenomic. When users purchase paid subscription plan for DexGuru analytics platform, under the hood smart contract purchases $GURU from the $GURU/$ETH pool, and transfer $GURU tokens to a vested time lock safebox in exchange for platform access. This creates constant and predictable cashflow for GuruDAO and $veGURU tokenholders. DAO controls how vesting safebox splits the profits from DexGuru between DAO treasury and $veGURU tokenholders who earn a share of the revenue that the platform pays out.

This system is showcased in the graphic below. 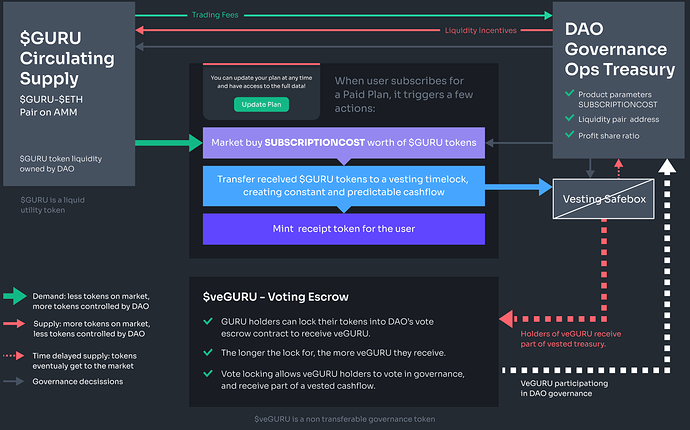 Participating in GuruDAO governance requires that an account have a balance of vote-escrowed GURU (veGURU). veGURU is a non-transferable ERC20 implementation, used to determine each account’s voting power. $veGURU is a token that is issued upon the locking of $GURU tokens in vote escrow smart contract. The amount of $veGURU received in exchange for $GURU tokens is dependent on the lock period. The longer $GURU tokens are locked for, the more $veGURU received in exchange. A user’s veGURU balance decays linearly as the remaining time until the GURU unlock decreases. For example, a balance of 4000 GURU locked for one year provides the same amount of veGURU as 2000 GURU locked for two years, or 1000 GURU locked for four years. The voting power is equal to the amount of veGURU on a user’s balance.

Instead of the team deploying smart contracts, we want to let our community do it. The exact mechanism is TBD now, but we are looking at Gearbox Protocol DAO-first launch as a good example.

A big decision has to be made regarding the DAO Treasury. As a community, GuruDAO needs a treasury to manage and step one is ensuring that it gets filled. There are a few options when it comes to bootstrapping token liquidity but a recent poll by 0xMaki shows the web3 community prefers Balancer LBP (Liquidity Bootstrap Pool) as the most fair, effective & best usability for participants.

With a Balancer LBP, the pool is able to dynamically change the weighting of the token pair over a certain period of time. With the majority of pools requiring a 50/50 split from token A/B, the dynamic Balancer LBP has advantages. The first being that the sell pressure from the change in weighting creates a generally agreed upon market price. On top of that, since the LBP starts with a high price, it disincentivizes bots and whales from snatching up all the liquidity from the beginning. Finally, the starting capital can be small, saving upfront costs.

In order to set up a LBP launch, GuruDAO needs to set the details and parameters:

100% of funds raised during the LBP will be set aside and DAO governed. Using protocol owned liquidity, GuruDAO will be able to build liquidity on-chain using the native token, $GURU. The DAO also earns trading fees from this liquidity pool that benefits the DAO and token holders.

GuruDAO treasury is 100% on-chain and community governed. Using the SafeSnap module from Gnosis, off-chain votes can be handled and processed for on-chain execution. For vote collection and verification, Snapshot is used by the DAO while the funds are stored in a Gnosis safe. As a safeguard, multi-sig is set up so that the owners are able to veto malicious actions and have power in the case of an emergency.

Some of the leading projects using the SafeSnap module are: Yearn, SushiSwap, Synthetix, Balancer, mStable and many others. For a further breakdown of SafeSnap, check out the documentation from Gnosis.

What needs to be decided prior $GURU token launch

Here is a non-final list of proposals we have to discuss and decide on:

When users purchase paid subscription plan for DexGuru analytics platform, under the hood smart contract purchases $GURU from the $GURU/$ETH pool, and transfer $GURU tokens to a vested time lock safebox in exchange for platform access.

Is this scheme a cost efficient way to add liqudity? I don’t know what will be the subscription price, but let say it’s $ 250 per month. As far as I understand that when a user pays $250 for the subscription, $GURU will be bought from $GURU/ETH pool and transferred to a vested time lock safebox. In this case, a big portion of $250 will be used for swapping and transferring on the Ethereum network (as we all know gas fees are very high on Ethereum). Am I getting it right?

I think 1-5% is not enough for early early community participants who support the GURU platform and participate in DAO. We aim to allocate more to early users (e.g. 5-10%).
Thanks for your continuous communication with users and community.

I think 1-5% is not enough for early early community participants who support the GURU platform and participate in DAO. We aim to allocate more to early users (e.g. 5-10%).

It’s up to DAO, but you have to balance LBP and early adopters. If you sell 20% of tokens on LBP, and airdrop the same 20% to early adopters, you will just end up with empty treasure when they inevitably dump airdrop. It will be a zero-sum game for DAO and we probably want to avoid such a situation.

When you ask for an increase of airdrop first question you should ask is who will be your exit liquidity.

A.Do you have any estimation of how many users will join the paid-subscriptions plan of dexGuru in the first months ?

$Guru sale to early community participants with the same price and vesting/lock schedule as VCs .
There are many community members that contribute to the overall success of GuruDAO . Giving
them opportunity to invest in $GURU with same condition of VCs would make the community more involved and eager in DAO’s success because essentially Dexguru success would be their success . I mean it will be an additional incentive for community to stay and support the GURU . I have borrowed this idea from GnosisDAO and what they have done with $Cow and they also planning it for $Safe .

but what do i know…lol

i really wish that you change the number to 10 percent . i think 5 percent is not enough for loyal users.
I really think and airdrop without distributing below 10 % to users is not fair enough . 5 percent is not really fair

I think we can appropriate more than 5%for early supporters.
Maybe this can be a good idea,maybe not:

That might be 15% adopters (7.5% at tge + 7.5% cliff 6 month with 2 years vesting) 15% lbp and 30% treasury. So in that case adopters will get something in the beginning and will follow project for 2 years like vc and team, lbp will allocate 2x more tokens that will have adopters in the beginning so that won’t impact on their investors activity and treasure will be full of funds. There is enough mechanics for staking to get $veGURU so not everyone will sell $GURU tokens + $BTC is not performing right now (that’s another reason to hold).

As investor who participated in different ico I’m curious what was the price of token for VC. Usually this info is public. Appreciate if that’s not a secret

Great draft by Nick and i think 7.5-10% for early adopters is ok. However the maximum number of tokens being capped at 100,000,000 is not good enough. I was thinking of 1 Billion maximum supply similar to CowSwap. Any thoughts on the maximum token supply?

I have to agree with Maxiiba. 1 Billion maximum supply will be ok just like CowSwap. Surely we will need to review this

This probably will be too complex in terms of KYC, whitelisting, and the whole logistics for such token sale. TLDR; - too many legal risks and early community participants getting airdrop anyway.

So you want to sell 15% tokens at LBP for example for 15%/ $1,5m and airdrop 20%/ $2m worth of tokens. Where $500k of missing liquidity will come from? What’s will left in DAO treasury after? Why are we even doing LBP if airdrop will wipe out DAO treasury immediately?

Again, before asking for a larger airdrop allocation, think about who will be your exit liquidity.

As investor who participated in different ico I’m curious what was the price of token for VC. Usually this info is public. Appreciate if that’s not a secret

Not a secret, our latest strategic round was at $50M valuation

I was thinking of 1 Billion maximum supply similar to CowSwap. Any thoughts on the maximum token supply?

what for? unit bias is something from last year and I don’t think it affects anything nowadays.

This is a great idea
10-15% airdrop
Vesting half of airdrop tokens and there wouldn’t be any sell pressure.
Lets discuss more about this.

But this is a decision the DAO will have to make. Because this ties directly into tokenomics which i think will be a key criteria for the DAO

they already done it without KYC so it’s not impossible but it’s understandable that there may be legal complexities that I don’t know of .

I think 1-5% is not enough for early early community participants who support the GURU platform and participate in DAO. We aim to allocate more to early users (e.g. 5-10%).